The First 7 Seconds: Make Them Count

When you think back to past interviews you've done, chances are the first few seconds of them don't leave a lasting impression. Your mind was probably spinning, wondering if you said the person's name right or if your palm came off as too sweaty in the handshake. You may have then been making small talk as you sat down to begin the interview.

By that time, though, a judgment has already been formed. It takes people only seven seconds to make a judgment about others. And during that very short time, an interviewer will make crucial determinations about you-including your likability, your trustworthiness, how aggressive or passive you seem, and how well you would fit in with others on the team.

I know it seems completely unfair. But there is actually a science that explains the phenomenon. And while I won't go into the nitty-gritty of it all, it's helpful to know that meeting people activates the part of the brain we use to assign value to people (and objects)-essentially split-second judgments of their importance to our social world.

Meeting people activates the part of the brain we use to assign value to people and objects.

Based on this initial determination, which is typically unconscious, your interviewer will decide (probably also unconsciously) whether to help you in the interview-by rephrasing questions, giving helpful feedback, assuring you with verbal and nonverbal cues-or to interrogate you. With so much riding on this all-important first impression, you can't leave it to chance. You must prepare with verbal and nonverbal ways to make a lasting first impression:

Perhaps the worst first thing that could come out of your mouth is, "I'm sorry I'm late." Being punctual is a deal-or-no-deal situation. Arriving late is not only rude to those you've kept waiting, but it's also highly unprofessional. If you're late, you're telling others that you are unreliable. Account for traffic and the unexpected. I once met a woman who was on time for an appointment, but a bit rattled. She later told me she was pulled over by a police officer for driving with expired license plate tags. But because she planned ahead and left extremely early, even the highway encounter left her plenty of time to get to our meeting. (And she luckily only got off with a warning.)

Too tight, too casual, too rumpled. We've seen it all-on both men and women. Granted, not every job interview requires a suit, but you still should present yourself as well-groomed and professional. Plan your outfit ahead of time. Try it on, iron it, choose your accessories. The last thing you want is a "wardrobe malfunction"-a hemline that isn't sewn in or a suit jacket that's too tight to button. Then these things suddenly become all you can think about.

If you're unsure if you should don a suit or just a blazer and jeans, ask your network what's considered appropriate, along with doing your own research. It's important to know the cultural fit. I'm reminded of the time my daughter was interviewing for a job and my wife and I urged her to take out her small nose ring. I've told her many times she should remove it for job interviews-precisely because of the split-second impressions people make. But she asserted that she had the right to be herself, which was a good point. She ended up going online to the company's website and Facebook page, and called someone she knew at the company. After finding out they let you bring pets to work and offer communal lunches, she left her nose ring in. She got the job-and now brings her dog to work.

We're all nervous when we go through interviews. But there's a difference between being nervous and acting desperate. Sitting on the edge of your chair, or saying things like, "I really need this job," can radiate desperation. That's only going to raise doubts in the interviewer's mind about your abilities, your fit with the organization, and why others haven't hired you.

Your nonverbal cues may be unconscious. Perhaps you aren't aware of how often you fold your arms tightly against your body (which can appear unfriendly) or that you frown when you listen. Video record a mock interview, or use Korn Ferry's interview prep app to see how you look and sound. Remember, actions sometimes speak louder than words. So make eye contact, maintain a good posture, and remember to smile. Conveying happiness and confidence makes others feel good about themselves. 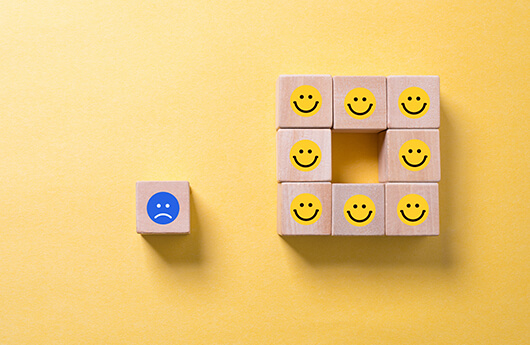